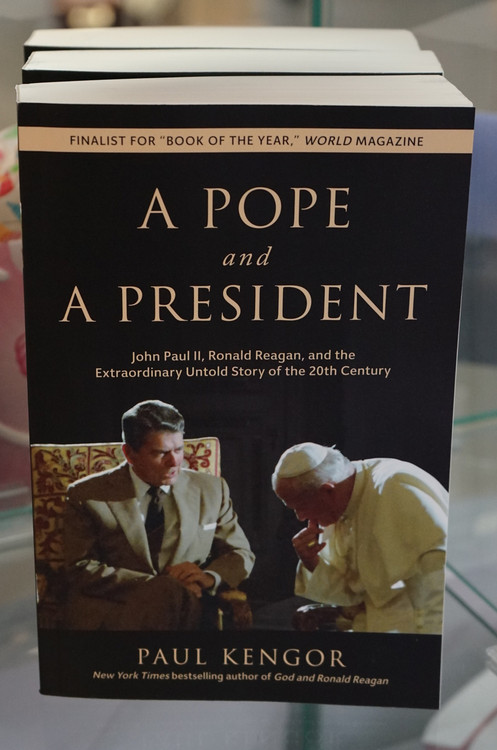 A Pope and a President by Paul Kengor

Even as historians credit Ronald Reagan and Pope John Paul II with hastening the end of the Cold War, they have failed to recognize the depth or significance of the bond that developed between the two leaders.

In this fascinating book, he reveals a singular bond--which included a spiritual connection between the Catholic pope and the Protestant president--that drove the two men to confront what they knew to be the great evil of the twentieth century: Soviet communism.

Reagan and John Paul II almost didn't have the opportunity to forge this relationship: just six weeks apart in the spring of 1981, they took bullets from would-be assassins. But their strikingly similar near-death experiences brought them close together--to Moscow's dismay.

Based on Kengor's tireless archival digging and his unique access to Reagan insiders, A Pope and a President is full of revelations. It takes you inside private meetings between Reagan and John Paul II and into the Oval Office, the Vatican, the CIA, the Kremlin, and many points beyond.

Nancy Reagan called John Paul II her husband's "closest friend"; Reagan himself told Polish visitors that the pope was his "best friend." When you read this book, you will understand why. As kindred spirits, Ronald Reagan and John Paul II united in pursuit of a supreme objective--and in doing so they changed history.