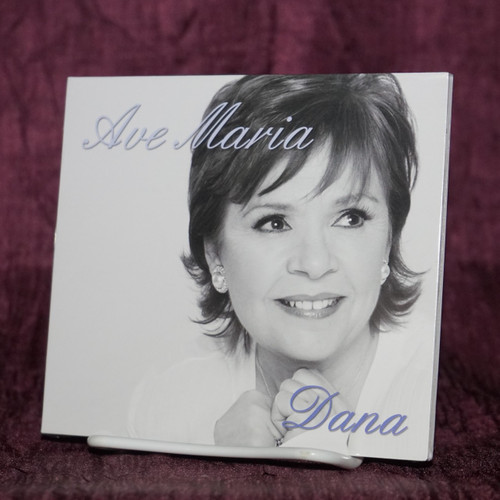 Dana sings a beautiful collection of Marian hymns, dedicated to the memory of her late mother Shiela Brown who taught Dana many of the hymns from her childhood which Dana has included on this album. Hymns like “Bring Flowers of the Rarest”, her mother’s favourite Marian hymn, also “I‘ll sing a hymn to Mary” and “The Bells of the Angelus”. Dana has used the original lyrics of these hymns as sung in Ireland. Then there’s the greatly loved Gounod’s “Ave Maria” and “Adios, Adios, Adios” the poignant Mexican hymn to Our Lady of Guadalupe, traditionally sung as pilgrims leave the Shrine of Our Lady of Guadalupe in Mexico on her feast day. “The Fatima Ave” is another well-known hymn sung by pilgrims to the shrine of Our Lady of Fatima. This hymn is traditionally sung while waving white handkerchiefs, as the famous statue of Our Lady of Fatima is carried among the pilgrims. Along with these well-known and beloved hymns Dana has added her new compositions such as, ”The Memorare”, “O Mary of Graces”, “Immaculata” and “Mary’s Song” composed by Dave Mullins. Each of these hymns has a special meaning for Dana. They are all presented in a gentle, prayerful way. We hope that along with fond memories, they will bring you peace and comfort as you listen to this exquisite collection of Marian hymns old and new.