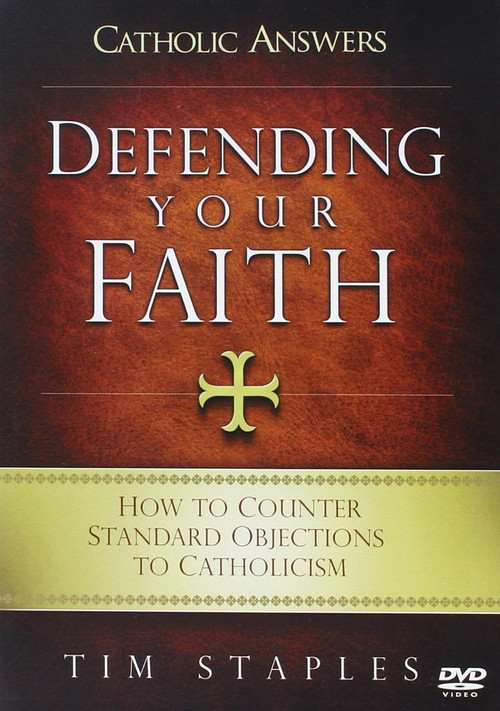 Defending Your Faith: How to Counter Standard Objections to Catholicism DVD by Tim Staples

The most common charge non-Catholic Christians make against the Catholic Church is that the tenets of Catholicism are man-made and unbiblical.

Those are serious charges, for sure. But can you refute them?

With his must-see DVD Defending Your Faith: How to Counter Standard Objections to Catholicism, Catholic Answers’ Director of Apologetics Tim Staples presents some of the most common challenges to Catholicism, and gives you solid, Biblically-based answers that you can use to refute them.

But Defending Your Faith is not simply 60 minutes of “dueling Bible verses”—because along with the scriptural support, Staples also explains the beautifully rational arguments which make these same teachings come alive in our hearts and minds. And Staples isn’t speaking from a purely academic perspective when he shares this wisdom with his audience.

In fact, in offering these common objections, Staples traces his own path—intellectually and spiritually—from Protestantism to Catholicism. Answering these sorts of questions, Staples says, “was the first step, for this man, on the road to Rome.”

What if you don’t know what your own first step is in leading yourself or someone else—by the grace of God—to see the truth of the Catholic faith?

Put yourself in Tim’s hands and let him show you where the pertinent passages are that explain the Catholic position, as well as some of the logical and rhetorical strategies you can use in any situation.

In Defending Your Faith, you’ll learn the biblical basis for: