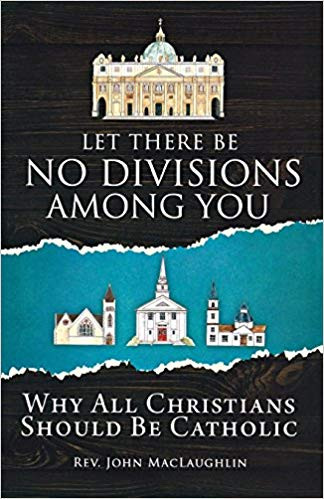 Let There Be No Divisions Among You: Why All Christians Should Be Catholic

With clear, compelling logic bolstered by countless Scriptural confirmations, Fr. John MacLaughlin here considers the oft-heard claim that "it doesn't matter what Christian denomination you join, so long as you're sincere."

Formally known as Indifferentism, this view has in recent centuries taken deep root among Christians. Indeed, indifferentism is the enemy not only of Protestantism and Catholicism, but of Christ Himself, who revealed to His apostles scores of truths about Himself and the way of salvation, never encouraging them to pick and choose among those truths.

Not only then, argues Fr. MacLaughlin, is one Christian denomination not as good as another; embracing the wrong one can lead a good-hearted soul into utter unbelief, jeopardizing his salvation.

For this reason, Fr. MacLaughlin devotes the second half of this immensely popular book to delineating for readers the two fundamental characteristics that will ever and always be found in the one Church that Christ founded and to which he intends all men and women to belong.