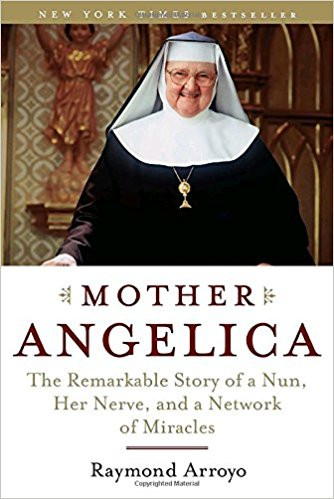 1981, a simple nun launched the world’s first Catholic cable channel in the garage of a Birmingham, Alabama, monastery, using her entrepreneurial instincts and $200 for seed money. Under her guidance, the Eternal Word Television Network grew by leaps and bounds. Today, EWTN offers twenty-four-hour television programming and AM/FM radio broadcasts in both English and Spanish, reaching more than 184 million viewers and listeners in 160 countries.

Raymond Arroyo’s engrossing biography, reads like a novel. Born Rita Rizzo in Canton, Ohio, in 1923, she was abandoned by her father and raised in poverty by a mother who suffered suicidal depressions. As a young woman, Rita developed severe abdominal pain and large protrusions. After doctors dismissed the problems as a “nervous” condition, Rita sought the prayers of a local mystic, and her symptoms disappeared.

Awakened to the power of prayer, she vowed to dedicate her life to God. She became a cloistered nun, expecting to spend her life hidden from the world. But her faith compelled her to unlikely endeavors, from establishing a monastery in Alabama to starting the network. Relying solely on “God’s providence,” Mother Angelica built the empire without concern for budgets or fund-raising campaigns. She had accomplished what the highest echelon of the Catholic Church had been unable to do.

“In this dramatic page-turner, Raymond Arroyo has captured the life and lessons of Mother Angelica, a woman who may well be the patron saint of CEOs. Buy this book and be inspired.” —Lee Iacocca, The Iacocca Foundation, former chief executive officer of the Chrysler Corporation

“Raymond Arroyo masterfully captures the complexities, humanity, and tenacity of Mother Angelica, who has long been one of my own personal heroes. The founder of the Eternal Word Television Network, Mother Angelica is a woman who dared to dream, to stand up for what she believed in, and whose faith showed that anything is possible. In Arroyo’s hands, she becomes someone you wish you had the opportunity to know and love. Read this book and believe.” —Nicholas Sparks

“This is some woman. What a wonderful story Raymond Arroyo has written—wonderful because it’s true, because he got the facts, because she chose him to tell them, and because he’s a born storyteller.” —Peggy Noonan, author of When Character Was King

“Mother Angelica’s personal words to me, her courageous example, and her constant prayers helped inspire my portrayal of Jesus in The Passion of the Christ. No one could have captured the essence of this modern-day saint better than Raymond Arroyo. His narrative gifts and understanding of Mother are clearly evident in this truthful and often candid depiction of one nun’s struggle to bring God to the multitudes. Surely this book, and Mother’s life will have an incredible enduring legacy.” —James Caviezel, actor

“Mother Angelica is one of the greatest entrepreneurs of all time, and is truly one of my heroes. With his “insider” perspective, Raymond Arroyo has done a masterful job capturing not only Mother’s immeasurable accomplishments but also her remarkable personality. Like Mother herself, this book has the unique combination of being both inspiring and entertaining.” —Thomas S. Monaghan, founder of Domino’s Pizza and Chancellor of Ave Maria University

“A rattling good story of fear, faith, courage, and bulldog tenacity, beautifully told. The drama of Mother Angelica’s life is a powerful reminder that the extraordinary lies just beyond the ordinary—if we have eyes to see and ears to hear.” —George Weigel, author of Witness to Hope:Tthe Biography of Pope John Paul II