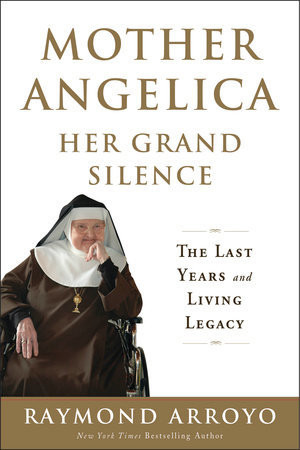 The Last Years and Living Legacy    by Raymond Arroyo

For more than a decade, the beloved, wise cracking nun who founded EWTN, the world’s largest religious media empire, was confined to her cell at Our Lady of the Angels Monastery in Hanceville, Alabama.  Though Mother Angelica is still seen and heard by millions each week in reruns on seven continents, the private drama within her monastery, her personal supernatural encounters, and the prolonged suffering she endured has remained hidden. Until now.

In a moving, dramatic conclusion to his four New York Times bestselling Mother Angelica books, Raymond Arroyo completes the saga of this singular nun with his most intimate book yet. Here are Mother Angelica’s spiritual battles in her cell—including encounters with the devil. Revealed for the first time is the personal request Mother made of God—which sheds light on her long silence.  Here are the unrevealed episodes of hilarity and inspiration; from playing possum (to avoid undesirable visitors to her room), to undertaking a secret trip to the far East, to blessing her nuns as they leave her care to create new monasteries, Mother Angelica’s spunky spirit shines through the narrative.

Mother Angelica Her Grand Silence, the touching, climactic coda to the Mother Angelica canon also offers readers the personal testimonies of people around the world who were spiritually transformed by Mother during her long public absence. And for the first time, the author writes movingly of his personal relationship with Mother—the highs and the lows.

Eleven years after the release of the definitive biography of Mother Angelica, audiences want to know the rest of her story. This is it.

“Even now, I still meet with Mother in memory and in spirit. And though I miss her physical presence, the writing of this work has allowed me to once again spend long hours with her and share her essence with others. This final book in the canon captures the last bittersweet years of a faithful woman who, in her grand silence and through her pain, touched more lives and did more good than anyone imagined. It also gives us an opportunity to have one last visit with the sister we called ‘Mother.’” – Raymond Arroyo