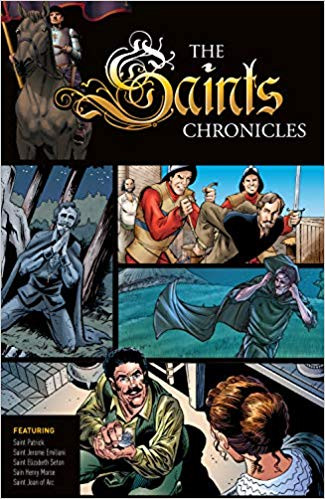 The Saints Chronicles bring vividly to life the stories of courageous Christians from the earliest days of Christianity to modern times. All four volumes of this Graphic Novel Series are packed with engaging texts and dramatic images that captivate and inspire readers of all ages.

In this first volume, you'll dive into the life of Christianity's boldest heroes of the Faith, including:

St. Patrick, a young boy captured by Irish pirates and made a slave, only to escape and later return to convert all of pagan Ireland to Christianity.

St. Jerome Emiliani, the bold soldier who became a Christian while imprisoned in a dark dungeon, escaping to join the priesthood and lead a life in service to the poor and suffering.

St. Henry Morse, the Catholic convert who became a priest and bravely spread the Faith in Protestant England, only to be arrested and martyred for being Catholic.

St. Joan of Arc, the thirteen-year-old-girl who God called to rally a demoralized army and lead the Catholic French to an overwhelming defeat of the English.

The stirring adventures of these brave Christian souls remind us that God has in mind for each of us a unique mission, worthy of all our imagination and all our daring.

Appealing to readers of all ages, these four Graphic Novels will enhance literacy and promote content retention while introducing Catholic saints in a form that can be enjoyed again and again.