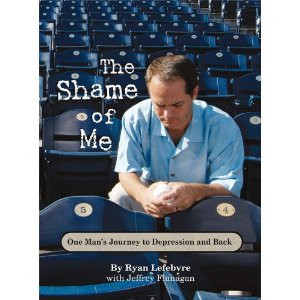 The Shame of Me: One Man's Journey to Depression and Back

The Shame of Me: One Man's Journey to Depression and Back

"I am alone, trembling on the floor in my closet. It is dark. There is no sound. I picture the cars driving away. They are leavingâ€¦that image. I begin to sob, breaking the silence. They are leaving. I am alone."

Kansas City Royals' broadcaster Ryan Lefebvre seems to have it all - a dream sports job of announcing Major League Baseball, a huge house on a lake, plenty of expensive toys, good looks, and the admiration of friends and fans. But depression is seldom deterred by such superficial trappings. And depression's grip on Ryan was so strong and so unyielding that he nearly ended his life.

In one moment, he's a glib play-by-play announcerâ€¦the next, he's a tormented soul on the floor of his closet. And that's just the beginning of The Shame of Me, the spell-binding story of Ryan's descent into the darkness of depression, his courageous struggle to recover, and his new perspectives on living a balanced and healthy life.

Told with intimacy and immediacy, Ryan's story is a must-read for anyone who has ever struggled with inner doubts. It is especially powerful for men who may be feeling lost, but are too embarrassed to confront their problems. Ryan, the son of former Major League player and manager Jim Lefebvre, and co-author Jefferey Flanagan take us through living hell before Ryan's recovery and redemption give us hope for anyone who suff ers from the debilitating disease Major Depressive Disorder.

The Shame of Me represents Ryan's sincere wish to help others by sharing his shocking story. Hardcover

Ryan Lefebvre is the celebrated broadcaster for the Kansas City Royals. A three-time all-Big Ten outfielder from the University of Minnesota, Ryan was drafted by the Cleveland Indians in 1993 in the 27th round. An active member in the Kansas City community, Ryan is the founder of Gloves for Kids, which raises money for youth programs in Kansas and Missouri.


Jeffrey Flanagan, also a graduate of the University of Minnesota, was an award-winning reporter and sports columnist at The Kansas City Star for 19 years, covering the Kansas City Royals and the Kansas City Chiefs. He also was a reporter with the Arizona Republic and the Decatur (Illinois) Herald and Review. Jeffrey also authored a baseball instructional book Lau's Laws on Hitting.