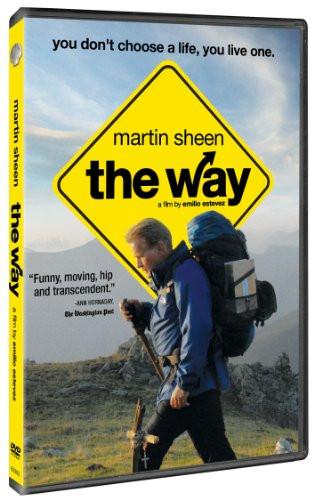 From director Emilio Estevez and starring Martin Sheen comes a modern-day odyssey - the soulful journey of a man rocked by personal crisis who sets off on an epic mountain trek, thinking he is utterly lost, only to keep bumping into surprise moments of community, companionship and inspiration that begin to steer his way.

This spirited road-movie-on-foot crosses territory that is alternately comic, adventurous and keenly moving, even as it becomes an unforeseen gift from a son to his father. Tom (SHEEN) is an affluent California doctor who arrives in St. Pied de Port, France to collect the ashes of his venturesome son, Daniel (ESTEVEZ), who perished during a freak storm in the Pyrenees Mountains.

Arriving in a daze, Tom intends to turn right back around for the home Daniel once dubbed an isolating "bubble" -- but at the last minute, he instead makes the most impulsive decision of his carefully ordered life. Following in his son's footsteps, quite literally, Tom begins to walk the 500-mile Camino de Santiago, an ancient pilgrimage that for more than 1000 years has been made by millions of around the world for every conceivable reason, from sheer adventure to searching for answers.

Out of shape and out of sorts, Tom stumbles from the trailhead, defiantly on his own. He doesn't want solace, and he's not so sure he believes in salvation. But try as he might to escape, he keeps running into unwanted company - including that of a sarcastic Canadian (DEBORAH KARA UNGER) trying to kick the habit, a hefty, hedonistic Dutchman (YORICK VAN WAGENINGEN) wining and dining his way through Spain, and a motor-mouthed Irish author (JAMES NESBITT) chasing the story that might blast through his writer's block.

Step by step, stunning mile after stunning mile, as Tom makes his way through incidents both frightening and funny - from raging rapids to Gypsy encounters -- he can't seem to help opening up to the breathtaking landscape, to his unavoidable companions and the new possibilities that now surround him at every turn. Suddenly, his misfit fellow travelers become his truest friends. Memories become his strength. And Tom begins to see that all the comedy, wonder and joy of the journey itself are what he was really after - and that this is just the beginning of going after his destination.